This System is a small, thermally-activated ventilation system for smaller installations. Ideal for the bedroom audio system tucked into a nightstand or the CPU in a kitchen cabinet.

The System 3E is a small, thermally-activated ventilation system for smaller installations. Ideal for the bedroom audio system tucked into a nightstand or the CPU in a kitchen cabinet. The System 3 is also ideal for use within a larger enclosure, where pockets of heated air must be dispersed.

Two 80mm fans ( 31/8" square, 1" thick ) connect to a small control unit, which also contains plug-in connections for the power supply and thermal probe.  The fans are mounted in the enclosure per suggestions in the installation instructions. The thermal probe is attached to the hottest component in the equipment enclosure, and the power supply simply plugs into any convenient AC socket.

The Active Thermal Management System 3 is a complete ventilating system for small audio/video enclosures or sections of large enclosures. It is comprised of two high quality 3.125" ( 80mm ) axial-flow fans with finger guards, a plug-type power supply, and a control unit with remote thermal probe.

The fans are surface-mounted over 3" round holes ( see detail on last page ). In free air, the fans can each move approximately 15 cubic feet of air per minute; in a typical installation that figure is typically reduced to approximately 10 to 12 CFM, sufficient to properly ventilate an enclosure of moderate size. ( A popular size for smaller enclosures is 2' wide, 2' deep, and 2 ½'  - 3' high, for a gross volume of only 10 - 12 cubic feet. ) When equipment is installed, the air within the cabinet is further reduced, so that, with proper placement, two small fans can change all of the air in the enclosure in less than a minute.

The location of the two fans is the most important consideration in installing the System 3. Properly placed, ventilation will be efficient; if improperly located, ventilation will be reduced. The key to effective ventilation is to place the fans ( usually one is used to bring room air in, one used to exhaust heated air ) so that a line drawn between them passes through or over the main heat source( s ). If necessary, both fans can be used in intake or exhaust mode. The hot equipment should lie directly in the path of air flow for maximum effectiveness of the System 3 ( or any ventilating system ).

This obviously preferable arrangement is not always easy to achieve in practice. Doors, walls, shelves, etc., always seem to be in the way! There are several ways to get around obstacles, and the installer must use his imagination to achieve the best results in a given installation.  Here are some suggestions for fan placement:

When installing fans, note that air exits from the side of the fan with the center label. Fans can be mounted using #6 or #8 screws.

Typical systems might have a shelf in the enclosure.  Locating the intake fan low on one side of the rear panel and the exhaust fan high on the other side, with a generous ( 5" - 6" ) hole cut in the center of the shelf allows room air to enter on the first level, cool a receiver or amplifier sitting above or below the shelf, and exit on the second level. ( A large chase behind the shelves might keep this from working effectively if it allows the air to flow behind, rather than over, the hot equipment. ) Similarly, when a side panel of a cabinet is exposed ( that is, it’s not up against a fireplace or wall! ) air can be brought in low on one side and exhausted high on the opposite side, or at the rear. Some possible fan mounting locations  are shown in the following diagrams.If there are substantially empty cabinets to either side of the equipment cabinet, air can be brought in or exhausted through them…  Do not, however, attempt to move air through grille cloth. The System 3 fans are not powerful enough to overcome the resistance of even porous cloth; more importantly, the dust that will soon accumulate in the cloth will cause a discoloration that is certain to cause complaints from the client. ( We discourage the practice of moving air through cloth of any kind, even when using the Active Thermal Management System 1, an extraordinarily powerful air mover; the cloth will sag and stretch out of shape & become discolored. )

After mounting the fans, select the location for the fan controller. It has 2 magnets on its flanges, allowing it to adhere to most audio-video components. Run the fan wires to the controller, and plug them onto the connectors FAN 1 and FAN 2. Plug the thermal probe’s cable onto the connector THRM on the controller. Plug the power supply into an AC outlet that is always live, and plug the power supply’s output lead into J1 on the controller. The green led should light. When the probe’s temperature-sensitive tip reaches approximately 88-90 degrees, the fans will begin to turn and the red led will light. Use a hair dryer to test the system; do NOT use an open flame or heat-shrink gun.

Choose a permanent location for the thermal probe. It can be located on the component that generates the most heat when on. It can also be located in the air near the top of the enclosure, if no one component generates a large amount of heat but together they raise the temperature of the enclosure significantly. Peel the paper backing off the anchor and press it against the mounting surface for a few seconds.

When cooling modern home theater systems, the fans may run continuously. Cable boxes, satellite receivers, some whole-house amplifiers and digital program recorders run continuously. Their heat may be enough to keep the System 3 fans in operation. The System 3, like all ATM products, is designed to operate continuously, drawing only a few watts of electrical power while keeping temperatures low in an enclosure. 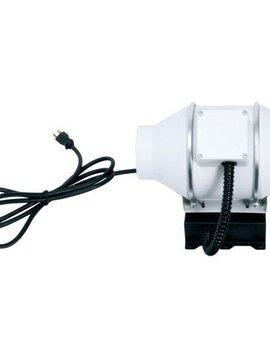 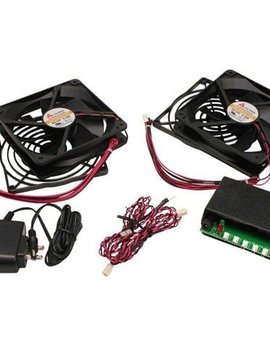 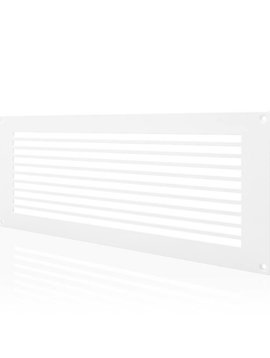 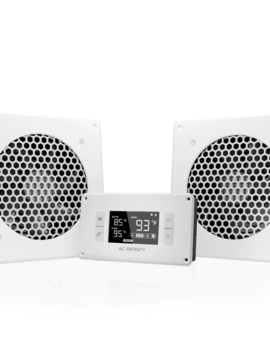